skip to main | skip to sidebar

An action masterpiece is Bourne 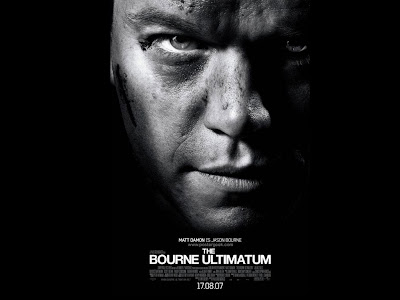 On the whole, Bourne Ultimatum can be slightly disappointing precisely because it’s not gratifying like action movies usually are. Not much is blown up on screen and as you leave the hall you can’t help but ask yourself, “What kinda action movie was that?”

Ultimatum, the third in the Bourne series, is also paced the fastest and the most political of the three movies, based loosely on Robert Ludlum’s novels of the same name.

During the movie's climax, an unarmed Bourne stands on the edge of a Manhattan rooftop close to the CIA’s anti-terrorism building in New York and asks the agent who has a gun cocked at him, “Do you even know why you're supposed to kill me? Look at us. Look at what they make you give.” This is as political as the monosyllabic assassin is ever going to get. That Bourne too has to get obvious and point fingers at the CIA and the government machinery is such a pity because this series, more than any other in recent times, has surprised audiences and redefined the action genre. Not once before in this series have proceedings gotten this literal.

Up until now, the psychological baggage that came with the movie was always underneath its boiling surface, like an ugly creature that can’t quite keep its head down. Except for the character Pamela Landy played with superb authority by Joan Allen and Nicky Parsons (Julia Stiles), most of the CIA is characterised as filled with officials who are too paranoid and kill in order not to be killed.

Matt Damon plays Bourne with sunken eyes that have deep, dark circles beneath them. Gone is the air of the successful action hero – just imagine the differences between the Arnold Schwarzenegger-starrer hit Commando and this film, and you will know what I mean.

After strangling to death an assassin in the loo of a building in Tangiers, Morocco, Damon for a minute looks as if he is crying. Clearly, murdering in cold blood is not easy for this assassin. What is even more surprising is the look of shock on face of Julia Stiles, a girlfriend Bourne doesn’t remember from the past. Later, we cut to Bourne’s crushed hands from the fistfight that precedes the murder. This is also a strange shot for an action movie because we never get to see an injury unless, like in Rambo, the hero is trying to get a bullet out of his shoulder or something. Clearly, Bourne is a vulnerable assassin, whose injures, both physical and mental, bother him tremendously. Perhaps, the mental ones, those that we never see, are harder to deal with. Damon always plays Bourne with his ghosts intact.

Ultimatum begins from where Supremacy left. After apologising to Neski’s daughter for killing her parents – whoever has apologised for killing in an action movie before – Bourne escapes from Moscow. (The Neskis are Bourne’s first targets. That tale is told in Supremacy.)

Though the globe trotting spy is common to both series, what differentiates Bourne from Bond is that Bourne is an assassin with a heart. In the next scene, you see Bourne meeting Marie’s brother (Marie is his girlfriend who is killed in Supremacy) and informing him about her death. Director Paul Greengrass lingers on the scene for a while longer that most directors would, impressing upon the audience the conflict Bourne faces all through the series.

Bourne wants revenge, and when he sees an article in the Guardian by its security correspondent, he arranges a meeting with him in London’s waterloo station. The CIA is already on the correspondent’s heels and the Waterloo sequence in an ideal example of the kind of tense sequences that the series has thrown our way. The sequence is shot in a jittery fashion that makes you teeth chatter. The editing may seem like the work of a director recklessly putting together shots in no logical sequence. But it isn’t. The effect caused by the editing that has marked the last two movies of the series is innovative and unsettling. I was amazed to see a number of top angle shots merged seamlessly with eye-level shots of Bourne on the move.

Later in the movie, in a sequence reminiscent of the one in Identity where he talks with the Frank Potente character, Bourne converses with Stiles in a café in Madrid. This time Bourne doesn’t talk much as he did then. Nicky talks a bit. She tells him how difficult it was for her to let him join the program. And pause. Greengrass cuts to Stiles to Damon to Stiles. He does this a couple of times. And then, Nicky asks, “You don’t remember anything, do you?” This is another sequence in which Greengrass excels himself; the issues troubling Bourne during the course of his peculiar life are never again as apparent.

Much of what bothers the amnesiac is from Ludlum’s best-selling series. In the novels, Bourne is sent undercover during the height of the Cold War to kill the Russian terrorist known as Carlos the Jackal. During an assignment, Bourne is shot and loses his memory. He can feel he is an assassin, but for whom? Are his murderous acts somehow vindicated? Ludlum doesn’t go to the extent of questioning the CIA’s assassination program simply because it isn’t there in his novels. That’s something that scriptwriter Tony Gilroy and others thought of as a post 9/11 addendum. Much of the plot that Ludlum expands upon in great detail is discarded. Instead, a more modern one that is meaningful to the current scenario is written in.

And 9/11 is something that has interested Greengrass. His last movie was United-93, the story of the one plane that never found its target during the 9/11 attacks.

I can straightaway name two aspects common to all three Bourne movies: The fistfight like the one in Tangiers in Ultimatum and the climatic car chase. The fistfight in a closed room with the cameraman prancing about like the fighters themselves is something pioneered by the Bourne series. And so is the no-holds barred, death-take-all car chase. Each time, Bourne’s car is wrecked. He wrecks two cars in Ultimatum, the first time after driving one off a roof and the second – an NYPD car – is crashed into a tunnel. It’s a rare logic defying moment when Bourne escapes from these wrecks relatively in good shape.

That said I found the car chase, as impressive as it was, formulaic. In a movie that defies formula, this sequence was trite.

Another thrilling moment occurs during the chase through the rooftops in Tangiers. The sound editing during this marvelously choreographed sequence is remarkable – the dance of the drumbeats in rhythm with the shots of a nearly flying Bourne as he jumps from one rooftop to the next is a special sequence that can only be enjoyed only on the bigger threatre screen.

In the past, actors like Brian Cox and Chris Cooper have impressed us. In this movie, it's the turn of David Strathairn. Exactly how Strathairn conveys to us that his character is a coward is a mystery to me. Was it the walk that reminded one of an eunuch? Or was there something else? But convey it he does and effectively so.

It’s rare instance when a mainstream Hollywood flick takes the trouble to make its hero intelligent and sensitive. In the good old days, nothing could bother the testosterone-fueled machines that inhabited the action thriller. In contrast, Damon’s Bourne doesn’t have much of a bicep to flash around. It’s his intelligence and survival instinct that are most impressive about him and give the movie a rare edge over ordinary action flicks.
at 1:30 am
Labels: Movies
Newer Post Older Post Home

My blog splits into